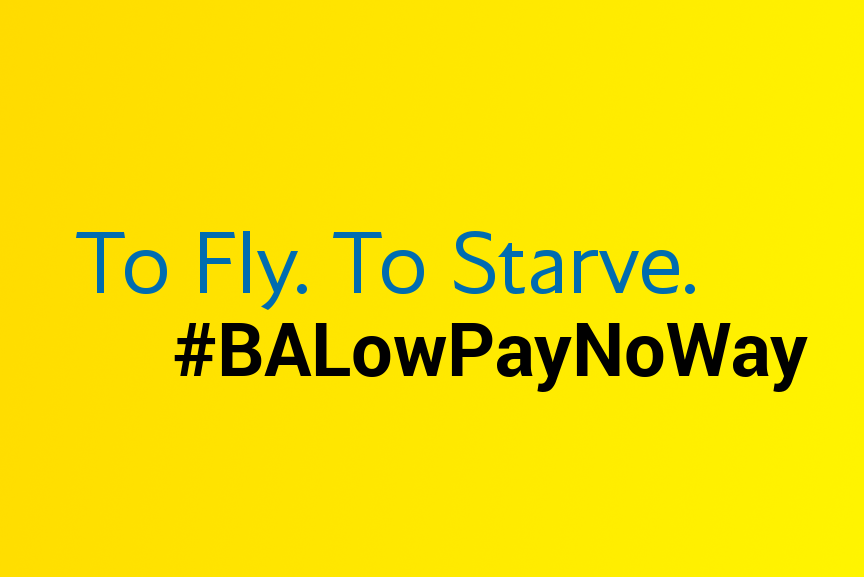 Unite the Union have announced further strike dates for its members in BA mixed fleet cabin crew. The latest strike is due to take place on 19th January for 72 hours.

In a previous article, the GMB union offered support and solidarity in their fight against poverty pay. Several GMB members attended the picket lines during the 48-hour strike action on 10th / 11th January, as well as messages of support and delivery of food to the Mixed Fleet “Food Bank” at Unite House.

We continue to offer our full support to Mixed Fleet Unite (MFU).

The GMB are appalled by the tone and content of various BA communications, that not only attacks MFU members, but attacks the very fundamental rights of trade unions. The company talks about zero tolerance on harassment and bullying, but continues to send out communications to belittle those members trying to fight for better pay.

In terms of our own members, they have been left in the dark as the full extent of the disruption has been hidden from view. While the GMB in the terminals is not in dispute with the company, we have seen our members undervalued over the years as the airline gets more greedy by the day. We have seen departments close, members having to reapply for their jobs as “performance-related pay” grades have been introduced, a gradual decline in our service, the introduction of poor check-in system – FLY adding further stress to our front line members, members in IT and finance being outsourced and moved offshore, A Scale members being highlighted as being nothing more than an expense to the airline and the introduction of our own “mixed fleet” on the ground – HCS 2012 contracts, on inferior pay, terms and conditions.

We have our own fights to come as BA look to take as much as they can from all of us. But we stand in solidarity with MFU members. No one takes strike action lightly and it’s for all of us to stand together in support.

Another plea from the GMB Union, don’t be fooled by the company propaganda. There will be a lot of it and there will be requests for staff to volunteer to cover for those on strike. While we can’t instruct our members not to, in terms of the values of being a union member, volunteering to break a strike helps no-one but the greedy at the top. Please think about it first as your fight could be next. Please speak to one of your local reps should you require more information.

We stand stronger together. There is power in the union.