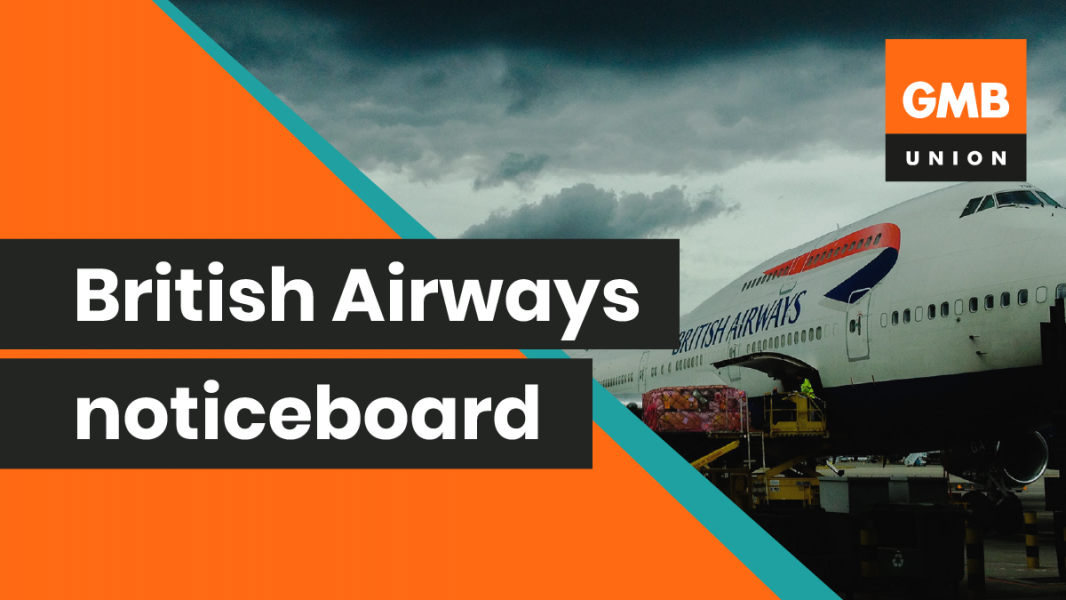 I am writing to you with an update on the situation at BA.

On Tuesday this week, I attended a BA Forum meeting, involving senior representatives from BA and my counterparts from Unite and from BALPA. This was a welcome change from the approach taken by Alex Cruz during the ‘fire and rehire’ period last year, where all negotiations were conducted locally, and without proper coordination with the trade unions from a national perspective.

However, the meeting was a sombre one. The aviation industry remains extremely fragile and BA say they do not expect to fly a full programme for some time to come. The government subsidies for colleagues on furlough are scheduled to end in a couple of weeks. BA signalled that they are considering the use of unpaid leave as a response to these difficulties.

The GMB made the point loud and clear that we can not find ourselves in the same position we did last Summer and that, if there is an agreement to be made, it would only be done if it was genuinely fair and equitable to all, with those with the broadest shoulders bearing most of the load.

The GMB strongly believes the government should be extending its support to protect workers in aviation, being the industry that has been most impacted by the COVID crisis. We were part of a trade union delegation that met with the Aviation Minister earlier this month. We expect to meet with the Treasury soon. We are looking for a special package of measures to extend beyond the end of September.

Despite this, we think that BA will still want to implement some form of unpaid leave scheme. It is our belief that they need to secure the agreement of the unions to do this successfully.

There is no doubt that this will be difficult. Our members have had a wretched time over the last 18 months. Prices are rising everywhere you look, and nearly everyone’s income has reduced due to pay cuts and furlough. We know that many of you are unhappy that those at the top, at BA and at IAG, have been protected, or rewarded, during the crisis.

We have had a lot of feedback saying that work should not be going out to places like India or South Africa if there is a shortage of work here. We would agree – particularly given the money BA have received from government, supposedly to protect jobs.

So while we recognise the depth of BA’s problems we will push back if necessary. As we enter these negotiations we will do our best to protect our members and report back on any significant developments. You can help by writing to your MP asking for them to support our fight for continued government support. Let us know your thoughts on how we should be responding to the ongoing crisis in aviation.